In 1998, Kodak sent out a set of promotional boxes to dealers, studios, and partners that contained four rolls of Portra Film along with a VHS with a promotional message from the company’s CEO. YouTuber Jamie Maldonado has uploaded that classic tape to his channel for everyone’s viewing pleasure.

Maldonado says he found the item on Etsy and “despite his better judgment” purchased it for his own collection. He says the promotional box was sent out around 1998 and, he guesses, to various photographers and studios.

The box is specially molded to hold the VHS as well as four film samples. 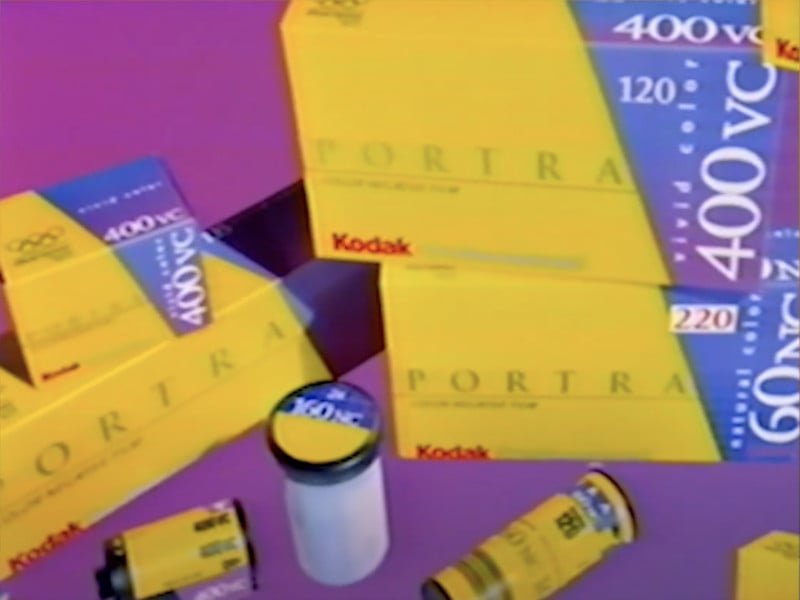 “Included in this gem of a find is a VHS packed with testimonials about Kodak Portra emulsion. In addition, a sheet included in the box touts various features and updates to the film from previous emulsions. Also included were four rolls of medium format Portra films.”

Maldonado says that he intends to keep the sample film stocks that shipped in the box in their original boxes, as he isn’t too sure about how they were stored and doesn’t want to risk opening and using the film only to find that it is in some way spoiled or ruined. Additionally, he just likes the collector’s appeal of the sealed boxes.

While the old film is special on its own, the real treasure may very well be that VHS. Maldonado has uploaded large chunks of it (edited down for time and music that is still copyrighted) and watching it is truly a blast from the past. The music, scene direction, and overall look and feel are peak 1990s advertising and represent nostalgia-fueled joy for anyone who remembers the period.

The video features the then-CEO of Eastman Kodak George Fisher, who discusses the new line of film and also plays host to several testimonials from big-name shooters from the time like Bambi Cantrell, Larry Peters, Lisa Murphy, and Al Gilbert.

Make sure to watch until the end, as the closing segment of the video is a spectacular minute of filmmaking to behold.