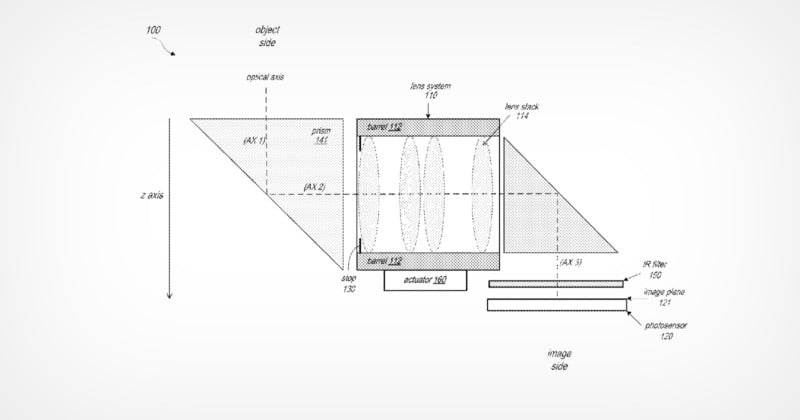 The United States Patent and Trademark Office has granted Apple a patent for a compact camera that uses a set of prisms to “fold” light and compress the amount of space needed for a telephoto lens. This type of lens is typically referred to as a “periscope” lens in smartphones.

As some background, “periscope” is the term used to describe a “folded” lens system that can squeeze greater zoom capabilities into the tiny camera arrays found in smartphones by redirecting light sideways through the body of the device via a sequence of lenses and mirrors or prisms. The concept has been used in other smartphones not made by Apple, like the Samsung Galaxy S21 Ultra’s 10x optical zoom.

Earlier this year, famed Apple expert Ming-Chi Kuo said that Apple was at least two years from implementing the technology in its devices, meaning it is highly likely that Apple users will be stuck with low-powered two to three times optical zoom for the next couple of years. Apple has filed multiple patents for a periscope-like lens system in the past, and today’s latest is just another added to the stack. One of its patents was filed back in 2015, and yet no iPhone has yet to use the tech.

The patent, reported by Patently Apple and spotted by DPReview, describes a “folded” camera lens that may be used in small form factor cameras, like smartphones. It uses two light folding elements — in this case, prisms — and an independent lens system ocated beetween them that includes an aperture stop and lens elements with refactive power mounted in a lens barrel.

The prisms “fold” the optical axis for the camera and reduce the z-height of the system. Inside the stack are one or more refractive lens elements mounted in a lens barrel.

Somewhat disappointingly, Patently Apple reports that this particular patent only describes an optical zoom of 3x, which isn’t much more than the 2.5x optical zoom found on the iPhone 12 Pro Max. Considering that periscope camera systems are capable of considerably more zoom compressed into a tight space — as mentioned, the Samsung Galaxy S21 Ultra achieves 10x optical zoom with its periscope camera — 3x zoom feels far short of what consumers would likely expect out of a periscope system in an Apple device. It’s one thing to be late to the game — which Apple already is — but another to be late as well as worse.

Whatever the case, if Kuo is to be believed, this patent along with the other periscope designs Apple has patented thus far won’t see use in a camera system until at least 2023.