There is perhaps no more likeable aesthetic in video gaming than that of the “cute ’em up”. Breaking out as a sub-genre from the 1980s shmup craze, the cute ’em up features the pulse-pounding, button-smashing, and scalpel precise chaos of its brethren but tends to replace the genre’s popular sci-fi or cyberpunk thematics with that of kawaii anime tropes — all cute animals, anthropomorphic hardware, and a hell of lot good old fashioned silliness… there’s usually a gal in a bikini thrown somewhere into the mix too.

Konami’s Twinbee (1985), Sega’s Fantasy Zone (1986) are among the titles celebrated for pioneering the genre, with the adorable actioners finally finding worldwide fame through Konami’s brilliantly daft series, Parodius. The cute ’em up genre — though just as challenging as regular shmups themselves — dialed down the intensity and ramped upped the colors, attracting a new army of fans and players who hadn’t been hooked by the interstellar shooters of arcade’s golden age.

But there was one other title that came blasting onto the scene big-eyed and dimple-cheeked: 1991 arcade Cotton: Fantastic Night Dreams. This debut effort from developer Success Corporation was a hit in its native Japan, but didn’t quite follow Konami’s aforementioned classics westward, ultimately remaining a cult franchise for dedicated shmup-heads. This week, 30 years on from its original release, Cotton and her friends finally have their opportunity to shine, thanks to a full remake courtesy of developer Rocket Engine and retailer/publisher Beep.

So grab a broomstick and fill your pockets with as much candy as y’all can carry. It’s time to fly the pseudo-friendly skies. 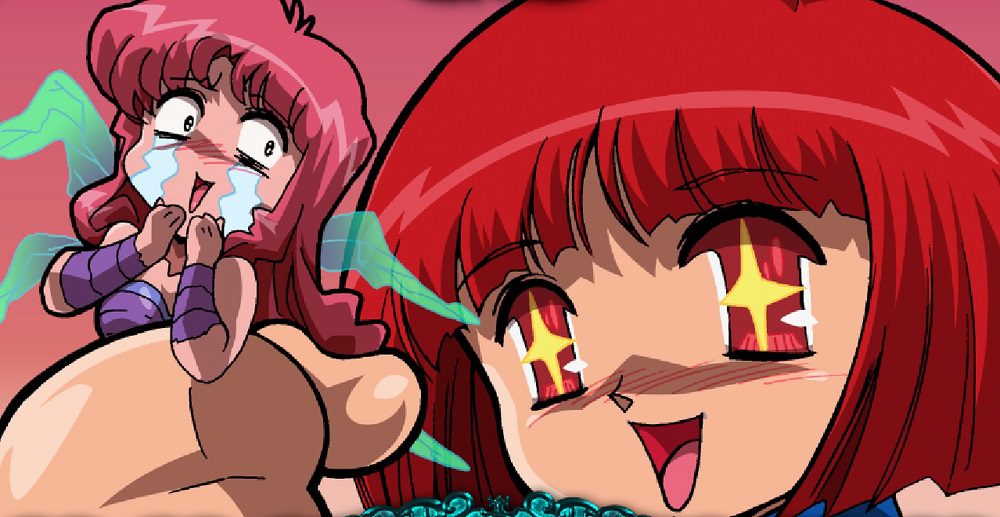 Fantastic Night Dreams: Cotton Reboot! is a ground-up remake of the 1993 X68000 port of the original Cotton arcade game — Rocket Engine having decided that this home port is a better balanced, tighter, and altogether more “definitive” version of the arcade original. Cotton Reboot‘s slight-but-charming story tells the story of the titular witch, (a somewhat grumpy and mischievous protagonist), who is tasked with saving the planet of a sexy space fairy, Silk. Originally utterly disinterested in Silk’s plight, Cotton has a change of heart when she learns the fairy’s homeland is a bonanza of Cotton’s favorite candy, “Willow”. And so, with a rumbling stomach and a book full of half-learned magic, Cotton and Silk jet off on a quest to recover the seven magic Willow, save Silk’s home planet, and return home in time for a teeth-wrecking banquet.

Cotton Reboot! is a horizontally-scrolling shmup, (though the stage maps themselves tend to follow rails in many directions). Players control Cotton as she blasts her way through seven distinct stages, packed out with weird fantasy creatures, swarms of adorable-yet-bizarre enemies, and a roster of challenging mid and end boss battles. While the action itself is as to be expected from any shmup, Cotton comes into its own via surprisingly complex magic and jewel mechanics, which must be mastered by anyone hoping to rack up an impressive end-of-game high score – Cotton‘s key goal.

As our lovely heroes blast their way through the opposition, various colored jewels will find their way onto the playfield. Cotton can direct fire through these crystals – diffusing her shots in multiple directions while simultaneously increasing their damage. Additionally, firing through the crystals changes their hue, which adds power and experience to Cotton’s book of screen-clearing spells. Finally, shooting a crystal too much renders it black, which kicks off its own chain of bonus multipliers upon collection. Summarised, the key to obtaining a high score in Cotton is mixed up in strategic shooting, timely gathering of crystals, maintaining your black jewel multiplier, and, of course, not getting hit. A surprisingly complex setup for what on the surface appears an amusing, family-friendly video game.

In addition to the above, Cotton has several meter-management mechanics, tasking the playing with maxing out the damage of Cotton’s shots and bombs, spell strength, and jewel counter. It’s a surprisingly strategic title and, like so many shmups, is built around the concept of practice and replay, with dedicated players challenged to master each stage, as well as develop smart strategies to keep the point counter spinning. But don’t this scare you off. If you just wanna hit the skies and lay waste to screenfuls of baddies in a colorful fantasy universe, all of your boxes will be ticked. 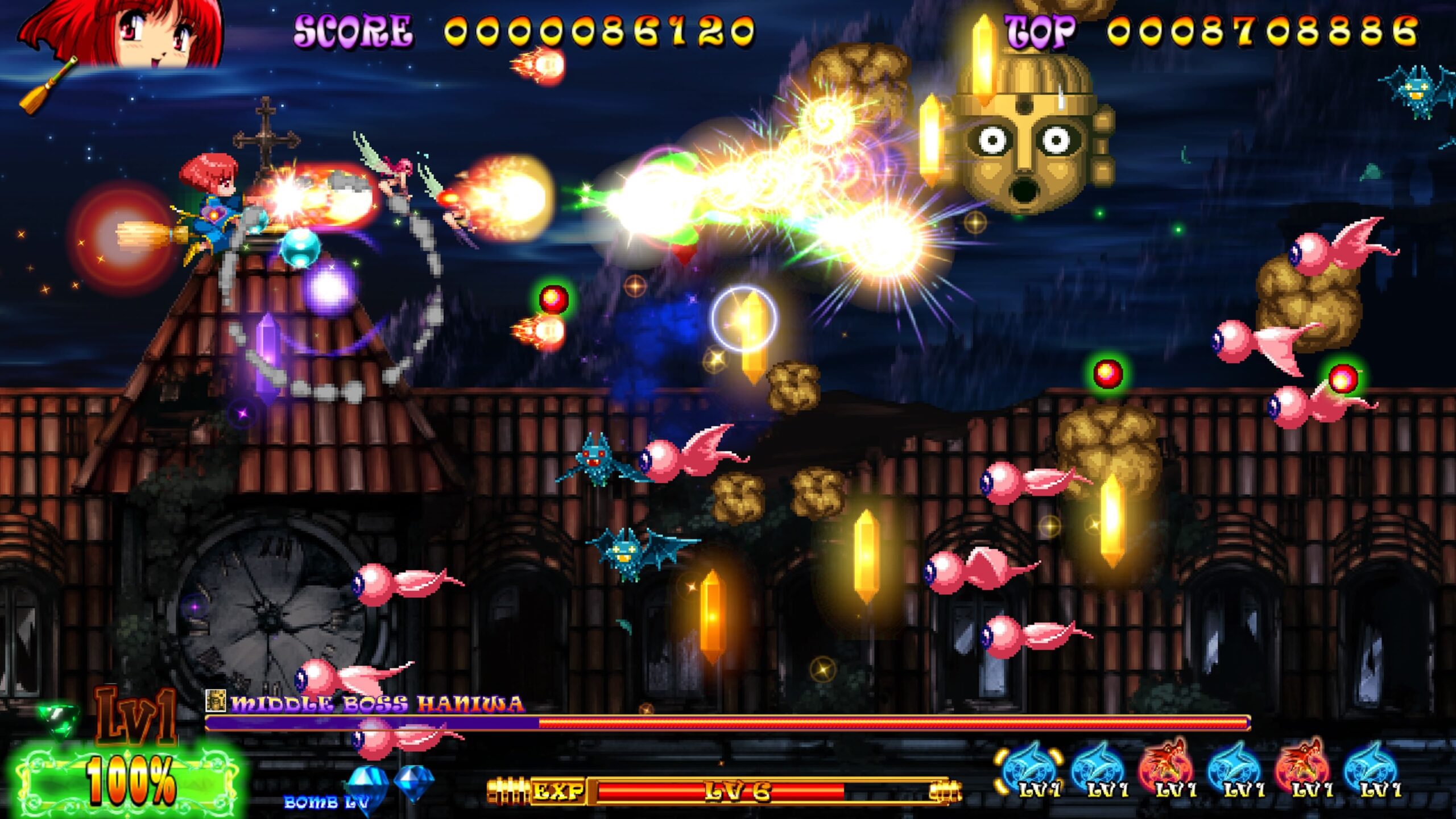 Cotton Reboot features a full visual/aural redesign of the X68000 release, offering wonderfully attractive new sprites for our heroes, foes, bosses, and pickups. Bright colors, flashy effects, and humorous animations are the order of the day, and the development team has done a wonderful job at bringing new life and character to the 16-bit original’s cheery universe. Freshly redrawn cutscenes retain the ’80s anime aesthetic of the original, all big haircuts and sparkling eyes, and will send any anime head of a certain age into a tizzy. Equally, freshly re-recorded dialogue adds life and character to Cotton, Silk, and any other characters they encounter on their quest.

Unfortunately, these attractive visuals are somewhat undercut by cruddy resolution issues. All of the visuals in Cotton Reboot — from cutscenes to sprites, backgrounds to text, featuring some nasty jagged edges, akin to that of a blown-up handheld/mobile title. While this may not be noticeable on say, Switch handheld, the PS4 version is let down by a severe lack of anti-aliasing which takes the polish of the team’s brilliant sprite work. On the subject of visuals, it cannot be denied that the remake’s action gets a little much to handle at times, with a handful of deaths attributable to overly busy special effects. A recent update to the Japanese version added non-descript “improved visuals”, but I am unable to ascertain whether that update is live in this new localized release. One would assume so, surely? 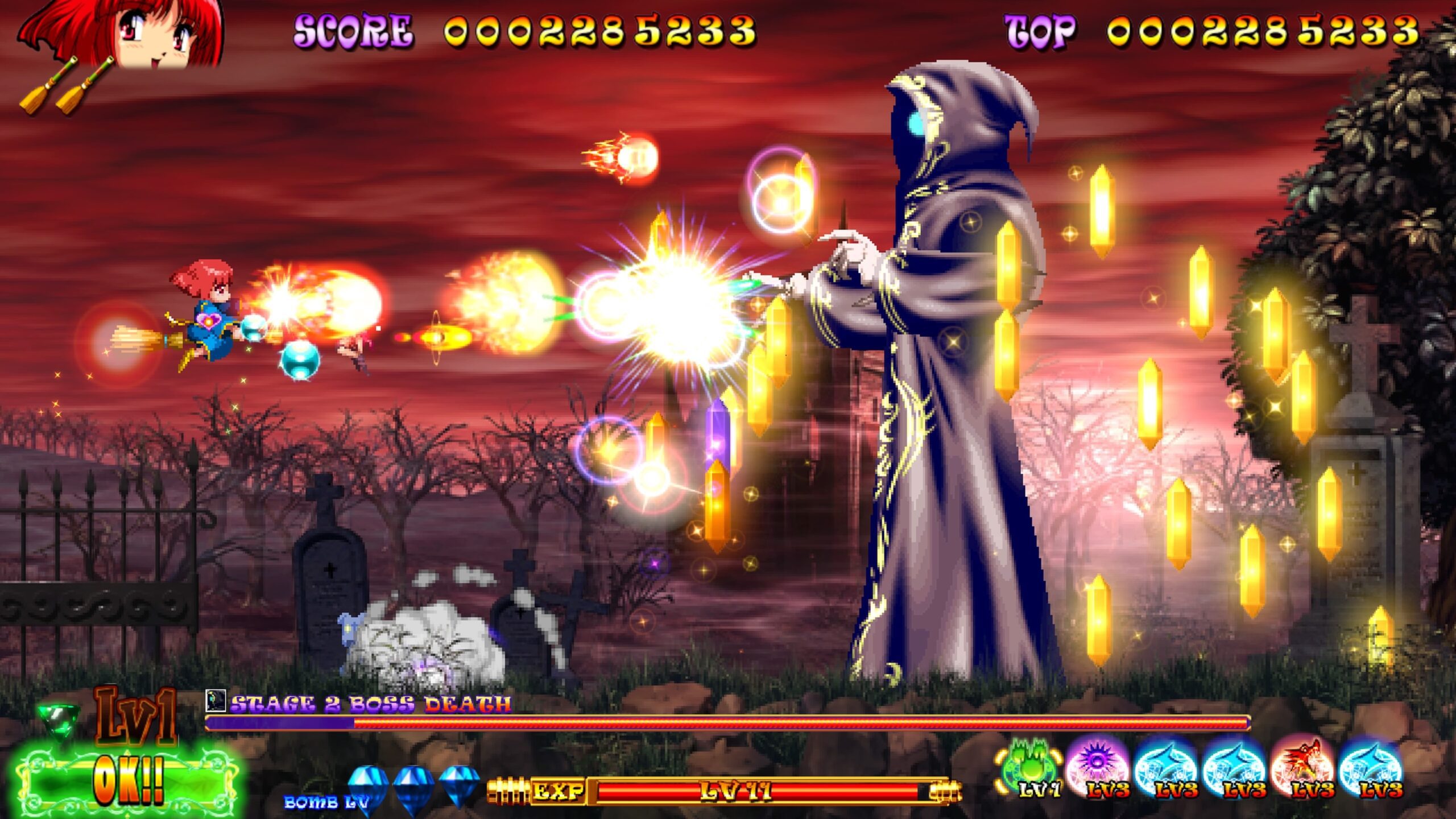 Aside from the Arrange Mode, (the remake), Cotton Reboot features only a small handful of extra modes and unlockable characters. These alternate modes include the X68000 edition recreated in its entirety, along with both two-and-five minute Time Attack modes which are chaotic, short-lived fun for the very best players. An online leaderboard system is in full effect for all modes, allowing dedicated Cotton lovers to pit their scores against some of the world’s best.

But, sadly, that’s about it in regards to content — a slim package that definitely stings at a $40 retail price. Cotton Reboot doesn’t even support the recent retro re-release “given” of save states and rewind functions. Also of note, the lack of a museum mode — for a game with such a cult history — is a missed opportunity. Still, from a pure gameplay standpoint, Cotton Reboot is raw, honest, fun. Shmup completionists, franchise faithful, and players who love to round out lazy evenings with old-school action will enjoy this passionate and spritely cheerful take on a forgotten classic.

Cotton Reboot! is a very pretty and highly enjoyable remake of one of the shmup genre’s most pioneering cute ’em ups — as endearing today as it has ever been while featuring surprisingly deep mechanics for score attack fanatics. It’s a shame a threadbare package, a subjectively high price, and distracting visual issues frequently threaten to spoil the party. For dedicated shmup heads, however, Cotton Reboot is an enjoyable blast from the past that comfortably paves the way for the sweet series’ incoming revival.

[This review is based on a retail build of the game provided by the publisher.]

Which Aspect Ratio is Best for your Photo / Video?