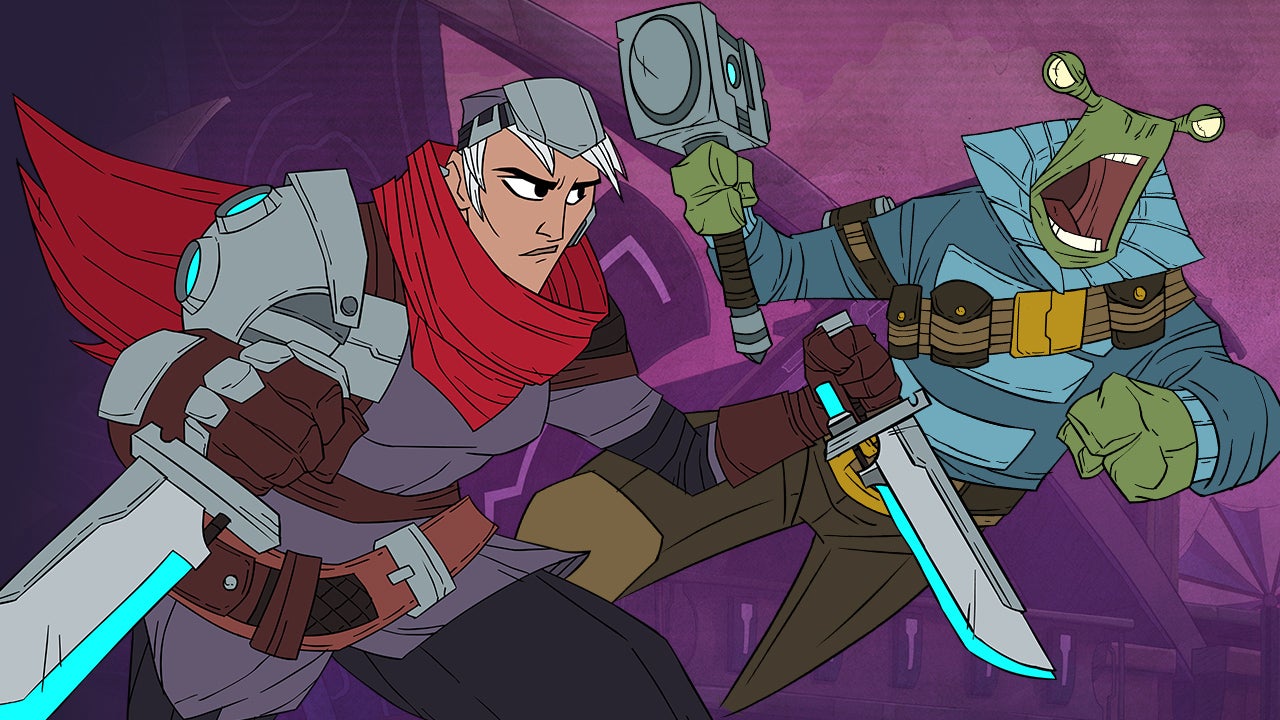 At times it seems like Griftlands is trying to see how many good design ideas it can stuff into itself without exploding. Strategic deck-building combat? Check. An addictive roguelike loop? Yup. Multiple storylines with compelling RPG elements? Uh-huh! Visual-novel goodness with social links? That too! Even more incredibly, this hodgepodge of awesome components crammed together into one game create something utterly unique and enduringly memorable.

Griftlands is a deck-building roguelike in the same vein as genre standouts like Slay the Spire and Monster Train in which you earn random cards battle by battle until you lose and do it all over again. The main way Griftlands distinguishes itself from those games is that each of its campaigns tells a more substantial story – and for the most part they’re all exceptional. Whether I was playing a mercenary on a quest for revenge, a retired soldier turned double agent who’s playing both sides of a rebellion, or a blackout-drunk slacker who’s been disowned by his family, everyone – whether they’re playable or an NPC – is looking out for number one. They might be looking to make a quick buck, plotting revenge, or making a grab for power, but almost no one is innocent or without ulterior motives. As a fellow grifter in the midst of this chaotic hive of ruthlessness and double-crosses, you’ve got to learn quickly or become another mark added to the pile of corpses; it’s a perfect setup for a conflict-heavy roguelike if I’ve ever seen one.

My favorite character, Smith, is an idiotic, carousing, two-legged dumpster fire of a person with practically no redeeming qualities… so I really related with him. His story centers around redeeming himself for a life wasted and the Disco Elysium-esque way in which he couldn’t care less about anyone or anything around him was an ideal backdrop for my heartless plotting. Figuring out a strategy to make the right friends and mitigate (i.e. murder) my enemies continues to bring me no end of joy.

Even after completing all three campaigns, the tongue-in-cheek fantasy world of con artists and thugs, goofy personalities, and hilarious dialogue were all just more reasons to try “just one more run” – even when I got my teeth knocked in at higher difficulties. There was always something pushing me to complete the run or at least get to the next major plot development.

Figuring out a strategy to make the right friends and mitigate (i.e. murder) my enemies continues to bring me no end of joy.

The general outline of each campaign follows the same storyline every time, but the exact missions you’re sent on, the characters involved, and the random encounters you stumble upon are procedurally generated so that no two runs are quite the same. With the exception of Sal’s campaign, which is a pretty bland revenge quest with few surprises, the stories aren’t something you’ll want to skip; even on repeat playthroughs I’ve found that small details change enough to keep it interesting, and it’s all based on the missions generated and the decisions you made.

Adding to the already substantial amount of charm is Griftlands’ hand-drawn Saturday Morning Cartoon style and bizarre-looking anthropomorphic animals and humans who live in its world. Voice acting is done through a Sims-style gibberish language, meaning you’ll be reading a lot of subtitles (which are enhanced by the tone from the voices), but the soundtrack during combat is every bit as catchy as you’d hope from a game you’re expected to spend a lot of time playing through again and again.

What makes Griftlands’ style of adventure especially interesting is that victory is not all about stabbing people in the front. Confrontation comes in two delicious flavors: social encounters, called Negotiations, and turn-based Battles, both of which require you to curate and upgrade their own specific deck of cards. Each mode has in common card-based mechanics and knocking down an opposing health bar before yours is emptied, but that’s more or less where the resemblance ends. The dramatic change of pace from encounter to encounter gives Griftlands a different feel than most of its peers.

Negotiations are slow, strategic, and complex contests of wits where you use persuasion and coercion cards to whittle down the enemy’s core argument.

Battles tend to be fast, action-packed, and very similar to Slay the Spire (and equally challenging and replayable), where you and any allies or pets you might have knock the snot out of all manner of beasts, robots, or fellow grifters who cross you. Because combat can be brutally challenging on higher difficulties, creating the perfect mixture of defensive cards, offensive cards, status effects, and items is essential for survival. In one playthrough with Sal I stacked up cards that cause bleed damage to drain my opponent’s health, while in another I used Smith’s bizarre ability to regenerate health by getting hammered and hurting himself to create an unstoppable rampaging drunken ogre. And, as is typical of this type of game, I couldn’t replay those the same way even if I wanted to; thanks to the way adventures are procedurally generated and loot is randomized for each playthrough, you have to learn to roll with the punches and find the best strategy by literally using the cards you’re dealt, which is a blast.

Negotiations, on the other hand, are slow, strategic, and complex contests of wits where you use persuasion and coercion cards to whittle down the enemy’s core argument in an almost incomprehensible flurry of status effects. Arguably there’s even more strategy to these encounters than to Battles because of all the different status effects and modifiers that require you to continually re-evaluate your plans – which can be fun or annoying depending on the circumstances. Also, there are multiple approaches for getting your opponent to see things your way. You can focus on “domination” cards, which use threats, insults, and coercion; or you can try “influence” cards, which use swagger, persuasion, and tact.

As you debate your opponent you’ll deal and receive dozens of buffs, debuffs that can be a bit of a headache. In one particularly irritating encounter, the enemy relentlessly spams your deck with cards that cost money to use or deal damage to you unless you pay, and even adds a dollar cost to playing your own cards. Watching your hard-earned cash fly away while a smug cockroach smiles on-screen can be infuriating – but beating them at their own game is almost always worth the effort.

Sometimes the amount of things to consider and juggle in Negotiations can get tiresome, which makes exerting brute force through Battles seem like an ideal alternative. That can create a problem, though, because attacking everything in sight just to avoid talking through your problems tends to make you a lot of enemies, and making lots of enemies usually leads to death. And I mean the bad kind, too. As in, your own death. That said, once I took the time to learn all of the different elements at play in a Negotiation and develop a strategy that let me utterly dominate someone without ever drawing a weapon was an incredibly rewarding loop.

Decisions you make, big and small, tend to have a ripple effect throughout any given run that can come back to bite you or save you.

There’s also quite a bit of randomness to deal with that’s mostly outside of your control. As you work your way through the verbal or physical blows of Griftlands, you’ll be forced to make lots of decisions with unknown consequences: side with one faction over another, make judgement calls during random encounters, and choose to draft and upgrade cards and character perks that may have a massive impact on your Battle and Negotiation decks.

But these outcomes can be influenced by the decisions you’ve made around who to become friends with and who to alienate. For example, if you get into a Negotiation against someone you’ve taken the time to build a positive relationship with, the going will be much easier since they like you. Or even if someone who likes you is simply in the room when you get into trouble with someone else, they’ll come to your defense and grant you bonuses to the encounter. Likewise, earning the ire of people around you will saddle you with devastating debuffs and make the going much more difficult. Decisions you make, big and small, tend to have a ripple effect throughout any given run that can come back to bite you or save you down the road. In a world where backstabbing and ruthlessness are a core part of gameplay, things get sticky very fast and the stakes are incredibly high in the best possible way.

Although each campaign is relatively short and can all be beaten in a few hours if you’re good or lucky (and I was neither), the sheer replayability of Griftlands is staggering. There are tons of unlockables, modifiers, increased difficulties, and alternate game modes. Like most deck-building games you’ll unlock prestige difficulties with each new tier you’ve conquered and gain access to new cards that are added to the available pool in the next run. You’ll also get to buy perks that give you slight advantages in the next playthrough, so even if you’re struggling to complete a campaign you’re making progress with each failure – a nifty feature if you find yourself staring at the “game over” screen more often than you’d like to admit (like I may have).

Once you’ve had your fill of the story, an unlockable Brawl mode will let you cut to the chase and skip all the dialogue and decisions to give you back-to-back Battle and Negotiation encounters that simulate what you might find in a given run. This is helpful if you’re like me and sometimes just want a little deck-building combat without all those pesky concerns like nuance or being a moral person. There’s also daily challenges and a boss rush mode that puts you through the paces with the most difficult encounters that Griftlands offers.

This ingenious blend of RPG mechanics, visual novel-style storytelling, and deck-building roguelike gameplay is a beautiful recipe for a kind of game I never knew I wanted.  Even though I’ve already spent the past week getting through each of Griftlands’ campaigns multiple times, I’m still looking forward to my next run – and the run after that. Campaigns are short and challenging, making them highly replayable and memorable adventures that reward your time. It’s kinda absurd that such an eclectic group of mechanics work together in such harmony, but once you’re bitten by their charms it’s quite hard to put Griftlands down.