Home » Gaming » Phantom Abyss hasn’t hooked me yet, but I’m rooting for it
Gaming

Phantom Abyss hasn’t hooked me yet, but I’m rooting for it

A brilliant little concept in need of more content

Phantom Abyss is out today on Steam Early Access, and while I adore the idea of dodging spikes, arrow traps, and eye-beam-firing guardians in procedural temple dungeons while other players’ phantoms run wild alongside me, it’s not necessarily worth buying yet.

That sounds harsher than I mean it to! The initial thrills are just a bit too fleeting. Let me back up, as I think this game is worth keeping tabs on during the rest of the year.

Phantom Abyss is a one-player first-person platformer adventure game, but it’s built with asynchronous multiplayer — and streaming — in mind. You’ll leap over pitfalls, slide under spinning blades, and fling yourself unnaturally high over obstacles with your whip. If there is any takeaway to glean here, it’s this: the whip rules and it makes the game.

It’s tricky to work out exactly how close you need to be to a would-be whipping grapple spot while you’re running for dear life and you’re midway through a leap of faith over a bottomless pit because you didn’t have time to plan this mess and you’re running purely on instinct. The feeling when you narrowly latch on with your whip and zip up a ledge? So so satisfying. I love the way Phantom Abyss peer-pressures me into going as fast as possible, often to my detriment. I can’t quite explain it, but it’s got this frantic obstacle course game show vibe. I must tap the Shift key to sprint at all times. I must.

While you’re trying to survive semi-randomized temples, which are broken down into distinct segments (with branching paths if you want to press your luck and keep going), you’ll see other players’ ghosts run amok. They can pop open treasure chests, smash pots, and set off traps, for better and for worse. You can even follow their breadcrumbs to beeline it through a labyrinth or simply see what not to do. That might sound too chaotic, but Phantom Abyss is a fairly easy-to-read game in terms of level design and trap “tells.” 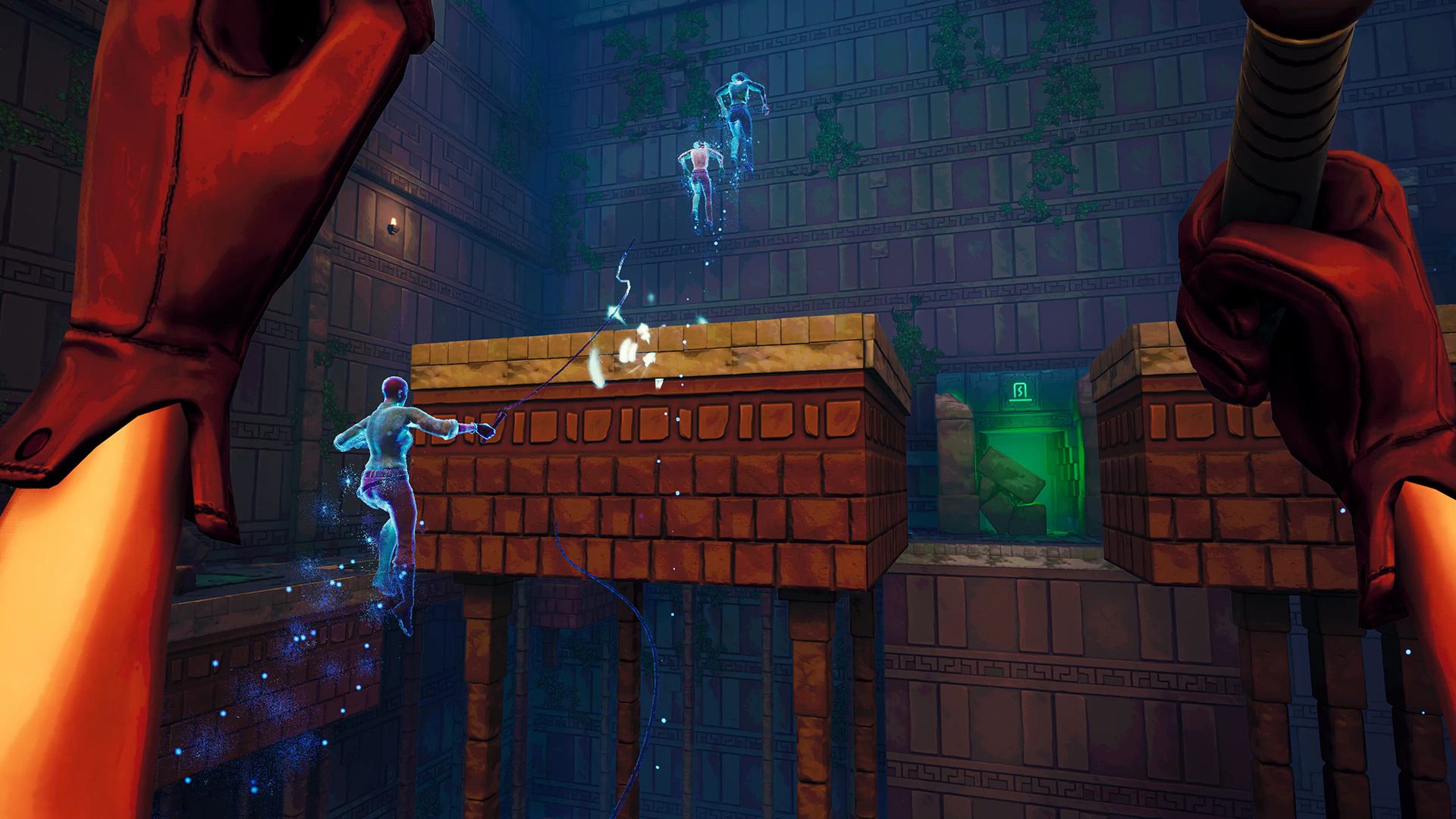 The ultimate goal is to keep your hearts (HP) intact long enough to claim a relic for your collection, and if you go all the way down to the deepest layer, where the rarest relic is located, it’s even possible to shut out that incredibly specific temple from the rest of the world. Consider it gone. I’ll admit, I haven’t seen this play out yet, but it’s a novel idea.

Reaching the end will be a tall order if you aren’t comfortable with fast first-person platforming, and I’d argue that it’s best played with a mouse and keyboard for quick aiming, but you can learn the tricks. There are also breathers between each floor, and you can spend currency you accumulate on the current run to refill your hearts or gain buffs like slow-falling “Wings.” Longer-term, you’ll unlock whips with various rarity tiers and pros and cons, like one that makes you immune to fall damage but strengthens guardians.

The guardians are also somewhat randomized (though you’ll know which one is a threat beforehand), and they grow stronger the deeper you go. One of them fires a laser, one of them launches a volley of balls that explode into toxic gas, and one of them pursues you like Principal Skinner calmly strolling through a river. I’ll let you guess which guardian freaks me out the most and causes me to slip up and make stupid mistakes.

Aside from coins used to give yourself more of a fighting chance, you’ll also want to keep an eye out for tucked-away chests that have keys. Sometimes you’ll need to find an orb to open up a door, but there are also key keys that are optionally used to extend your run far enough to reach the rarer relics. I like the decision-making that goes into whether I should just call it and walk away with a consolation prize, and I wish there were more opportunities to make meaningful choices in Phantom Abyss. Back at your base, you can buy fancier and more daring whips, but this hasn’t been a big motivation for me. 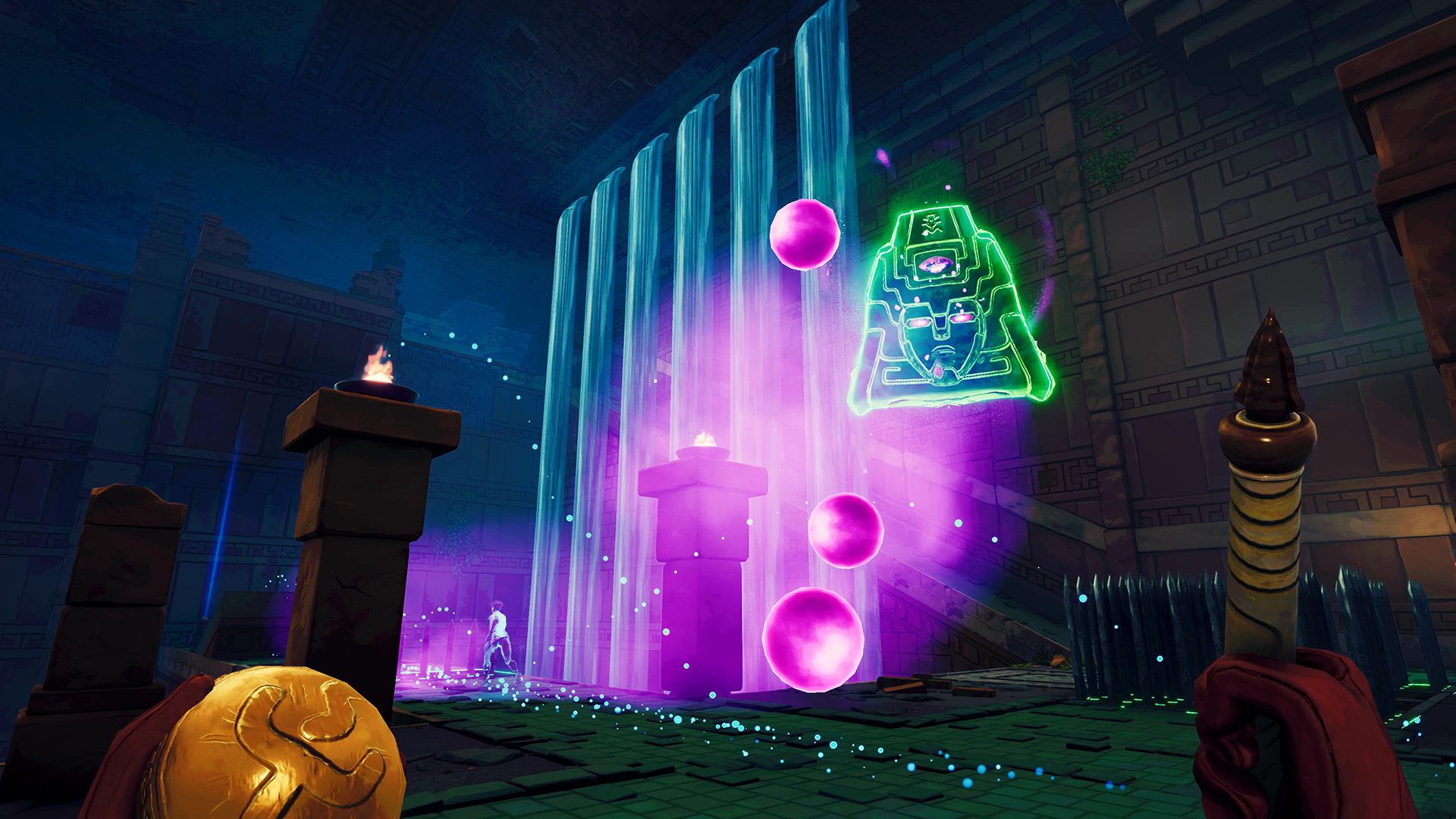 I like what I’ve seen of the second zone/biome, and there’s apparently three total in the current Early Access build. Problem is, it doesn’t take terribly long for repetition to set in.

I’ve spent a couple of hours with Phantom Abyss, which, barring a sudden influx of Steam friends picking up the game, is probably all I have in me until more substantial content updates roll in. It was a great two hours, full of “oh shit”-eliciting close calls and surprisingly fun first-person whip-based platforming, but I’m not feeling much of a desire to keep plugging away to reach the deeper, deadlier zones. It’s the nature of the beast.

Team WIBY expects to stay in Early Access for “at least a year” to build out “new rooms, traps, whips, zones, and additional gameplay features.” That’s what the game needs (along with a captivated streamer audience), and I can envision it coming together in a way that pulls me back in. As it stands, though, Phantom Abyss feels too one-note.

My dream? A temple that captures the crushing despair and all-out euphoria of Sen’s Fortress. (Too demanding? Hey, it’s just a dream!) The Early Access content is a fine starting point, and I hope things progress at a reasonable pace. I’m rooting for this one.

[These impressions are based on a Steam Early Access build of the game provided by the publisher.]

Jordan is a founding member of Destructoid and poster of seemingly random pictures. They are anything but random.