The International Data Corporation (IDC) has published a forecast for the global personal computer market for the current and future years. Despite the global shortage of electronic components, the industry will show significant growth in 2021.

Released figures include shipments of traditional desktops, laptops and workstations. Tablets, detachable keyboard hybrid laptops, and x86 servers are not into calculations.

Analysts believe that worldwide PC shipments this year will amount to just over 357 million units. If this forecast is justified, growth in relation to last year will be at the level of 18.1%.

This significant increase in supply is due to the rapid development of distance learning; and teleworking platforms in the context of the ongoing pandemic.

However, the picture will change next year. IDC expects personal computer sales to decline 2.9% year over year.

Over a five-year period, the CAGR (compound annual growth rate) will be at 3%.

“We continue to get an abundance of questions about the growing semiconductor shortage and its impact on PCs; but it is important to peel back the onion because there is a lot happening underneath the PC supply chain;” said Ryan Reith, program vice president with IDC’s Worldwide Mobile Device Trackers. “We don’t debate that the overall semiconductor market is constrained right now, but for the overall PC market it is a very different narrative than the years leading up to the pandemic. Prior to 2020, the market was undergoing CPU shortages and to a lesser extent tight memory and panel supply. Now the focus is around lower-priced components like notebook panel driver ICs, audio codecs, sensors, and power management ICs (PMICs). Nonetheless, without 100% of the parts; a finished system will not ship, so a bottleneck is a bottleneck.” 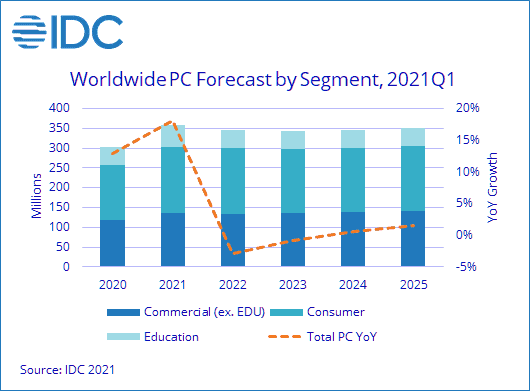 “There is a common denominator across the parts in short supply (auto ICs, sensors, PMICs, display drivers), which is that they use the same technology of 40nm or older nodes,” said Mario Morales, program vice president, Semiconductors. “Mature technology nodes account for more than 50% of all the capacity in the semiconductor industry and suppliers are only gradually increasing capacity as they prioritize on the largest segments of their business and invest more on mainstream and leading-edge nodes. IDC expects that shortages will begin to ease by the end of Q3 this year. A broader upstream balance of the industry will not happen until the first half of 2022.”

“As the component shortages continue into next year, we anticipate at least some of the buyers will settle for desktops in place of notebooks as the urgency of demand for any kind of PC remains quite high,” said Jitesh Ubrani research manager for IDC’s Worldwide Mobile Device Trackers. “Longer term, the consumer refresh cycle is also expected to be pulled in slightly as the pandemic has raised the profile of PCs and consumers continue to spend more time and dollars on PC gaming and content consumption.”