Uncharted 4 will be next PlayStation game to reach PC, India becomes a key market

Sony is narrowing down upon key new expansions are for the immediate future. The company is focusing on PlayStation Studios as an avenue for expansion of the PlayStation ecosystem. For a long time, the company has collected bad results in other departments but very positive ones from the PlayStation division. The company has the PS5 as one of its key products for the near future and consequently, the games produced by the PlayStation studios will be a determining point that will count in favor of its console. However, the company also wants to expand the accessibility to acclaimed titles. After bringing Horizon Zero Dawn and Days Gone to PC, the Japanese firm will bring Uncharted 4 to the platform.

For those unaware, Uncharted is a massively popular PlayStation Studio title that sold millions of copies across the world. So far, the games remained exclusive to only the PlayStation platform. Now, Sony wants to further expand its portfolio on PCs and the Naughty Dog franchise is a good option. For those unaware, Uncharted 4 is the last part of Nathan Drake’s adventure in consoles. The game may premiere on PCs until the end of this year.

India will become a key market for Sony’s PlayStation division

As far as the PC segment is concerned, Sony wants to increase game revenues from Horizon Zero Dawn by up to 250 percent. The company hopes to do so by, expanding its PC footprint. Interestingly, the Japanese firm lists India as one of its new geographic areas of interest. It’s not entirely clear if India will become the new area of cous in terms of gamer engagement, or Sony would put more focus on India in terms of making more of its hardware available in the country. PlayStation Studios will also apparently focus on the mobile gaming ecosystem in order to expand its footprint and increase business. Unfortunately, Sony still needs to clarify if this means building new games for mobile, or if it will adopt existing, popular game portfolios to smartphone gaming. 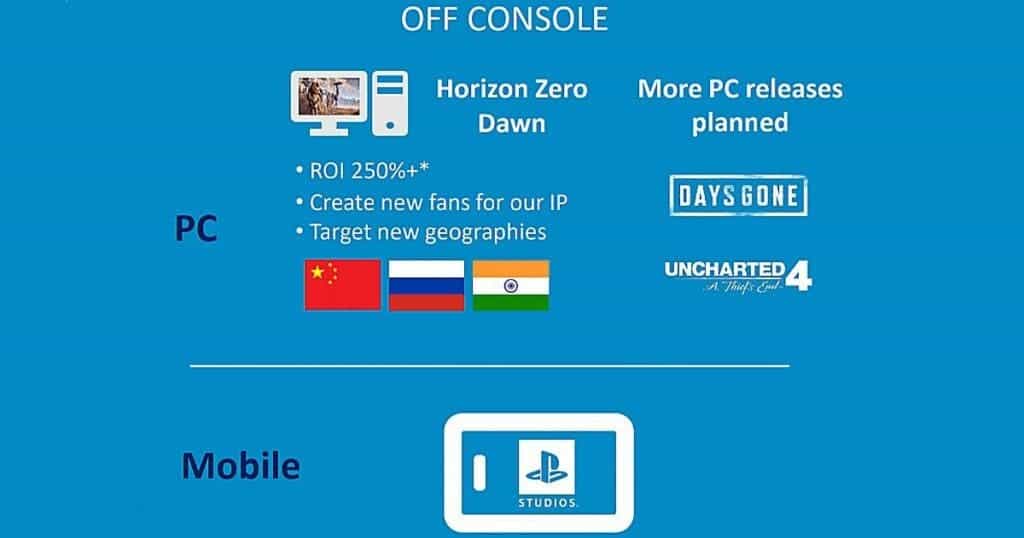 The focus on India as key new geography will certainly come as welcome news among gamers in the country. Especially those who are part of the PlayStation ecosystem. The company so far has been offering underwhelming supplies of the PlayStation 5 in India. Thus raising complaints regarding Sony not treating gamers in the country with as much seriousness as it has elsewhere. For now, it remains to be seen how the company will improve its marketing strategy in India.