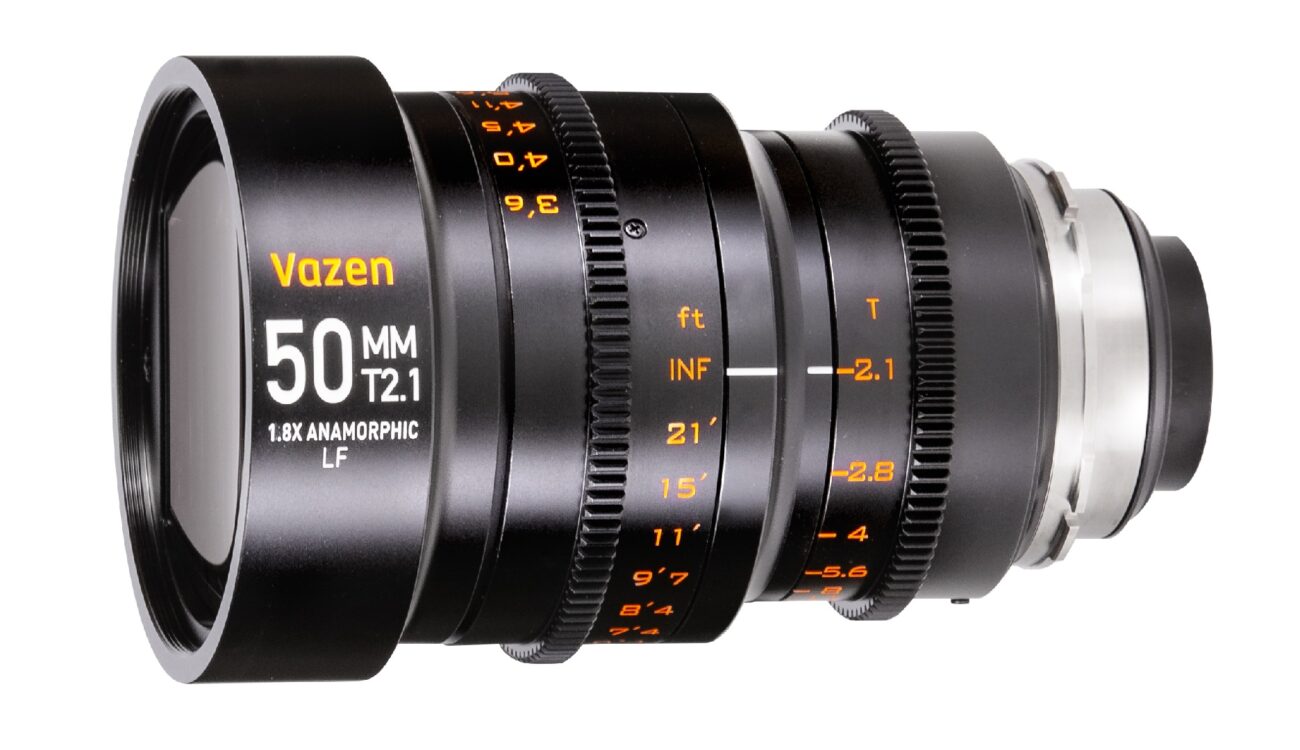 The Chinese lens manufacturer Vazen offers a variety of anamorphic cine prime lenses. The company caught our interest last year in August when they announced the 85mm T2.8 1.8x Anamorphic lens for PL / EF full-frame cameras. My colleague Gunther took the lens out with the Panasonic LUMIX S1H so make sure to check his review.

When it comes to 1.8x and 2.0x full-frame anamorphic lenses, the prices can often get astronomical and such lenses are mostly rental-only stuff. Vazen priced the 85mm anamorphic lens at $8,000 which is still a lot of money, but it can already make sense for camera operators to own such a lens if they shoot anamorphic a lot. Now, Vazen announced a new focal length to complement the 85mm – let’s take a look at the Vazen 50mm T2.1 1.8x Anamorphic.

Same as the 85mm 1.8x anamorphic, the new 50mm also fully covers large-format cinema cameras like RED Monstro, ARRI ALEXA LF, Kinefinity Mavo LF, or the Z-CAM E2-F8. In order to conveniently complement the 85mm, the new 50mm lens has the same focus and aperture position for easy lens switching on set. The lens also has the same 86mm front filter thread for ND filters or diopters installation. The front diameter is a standard 95mm for matte box mounting.

The new Vazen 50mm T2.1 1.8x Anamorphic features a compact and lightweight design. Weighing 3.42 lbs (1.55 kg) and being 5.24” (13.3 cm) long, it is one of the world’s smallest 1.8x anamorphic lenses for full-frame cameras. The small size and weight can be useful when balancing on gimbals and rigs. The entire lens is built out of aluminum and the independent aperture and focus rings are incorporated with 0.8 mod cine gears.

As the company states, all Vazen 1.8x anamorphic lenses feature a front anamorphic design that delivers a smooth oval bokeh and blue horizontal flare that is not over-saturated. The focal length of anamorphic lenses always means wider FOV than with spherical lenses. The Vazen 50mm lens features a 65° horizontal field of view (similar to a 28mm spherical lens). The closest focusing distance is 3.6′ (1.1m) from the sensor.

Vazen claims that the lens delivers good sharpness, even at wide open. I am curious to see some tests and sample footage. The lens is available in an interchangeable PL and EF mount. Both mounts and shims can be found with the lens in a Vazen hard case. Interestingly, Vazen plans to also release a 135mm lens (expected to be ready to ship in 1-2 months) to complete a 3-lens 1.8x anamorphic set (50mm, 85mm, and 135mm).

The new Vazen 50mm T2.1 1.8x Anamorphic Lens is currently available for pre-order. The company says that the shipping will start in late August 2021. The retail price for the lens is the same as with the 85mm – $8,000 (around €7,000 without VAT in Europe) with free priority shipping included. Vazen offers a $2,000 discount for customers who order both the 85mm and the 50mm anamorphic lenses.

Do you have experience with the 85mm 1.8x anamorphic lens from Vazen? How do you like the look? What do you think about the newly announced 50mm? Let us know in the comments section underneath the article.